Horses with the “Roan” gene have white hairs evenly intermingled with its “base color” throughout the body, while the head and “points” – lower legs, mane and tail – are generally its solid base color. The head, legs, mane and tail may have a few scattered white hairs or none at all. The roan pattern is dominantly-inherited, and is found in many horse breeds. True roan is always present at birth, though it may be hard to see until after the foal coat sheds out. The roan coat may lighten or darken from winter to summer, but unlike the gray coat color, which also begins with intermixed white and colored hairs, roans do not become progressively lighter in color as they age.

THE THREE MOST TYPICAL ROAN COLORS 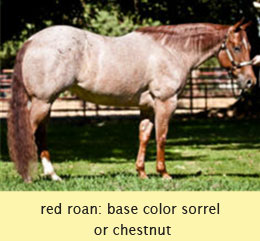 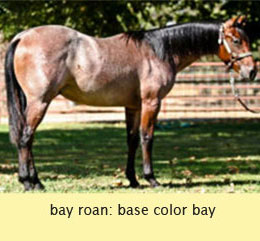 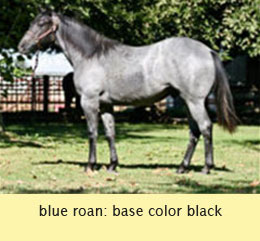 However, the roan gene can be expressed over any base color and in combination with other overlaying color genes such as dun or gray. Thus, one can have the roan gene expressed with a palomino base color (for example – yellow Roan of Texas), or a seal brown base color or even with a grulla base color. The roan gene can also be present with the gray gene. Once the foal sheds its foal hair coat, it will appear to be a roan with solid colored legs, head and mane and tail and then, as the horse matures, its entire body will have an increasing number of while hairs until it appears to be entirely white upon full maturity.

Due to the fact that many horses with the gray gene (and without the roan gene) have their white hair become more predominant in their body before it predominates their legs, head, mane and tail, they can appear to possess the roan gene early in life. It is only after the whitening that full physical maturity brings to all truly gray horses, that it becomes apparent they possess the gray gene. However, as noted above a horse can possess both the roan and gray gene, but the gray gene predominates over any other color including roan.

In addition to the gray, two other genes that produce white hairs in horses, rabicano and sabino are often confused with the roan gene.

Rabicanos possess a mixture of white hairs that are most dense around the base of the tail and the flank. Rabicano roaning frequently forms rings of white hair around the base of the tail, called a “coon tail” and in extensively roaned rabicanos, the white hairs may converge to form vertical stripes over the ribcage. Rabicano is found in many breeds but is not a recognized color in the AQHA. Rabicano horses are classified by their base color in most breeds.

The roaning of Sabinos is not evenly intermixed over the body of the horse as it is in a true roan. The whitehairs of Sabinos are distributed in uneven irregular, rough-edged patches of white that originate from the lower legs, face, and midline, Commonly Sabinos have 4 white legs, face, and midline, Commonly Sabinos have 4 white legs (high white), white on the head, jagged or lacy white markings on the body. The borders of these white patches can be heavily roaned, and some sabinos can be easily mistaken for roans. White areas on the belly, extreme roaning and white chin spots also go hand in hand with Sabino.

Roan is a simple dominant trait symbolized by the Rn allele. Roaning, caused by the roan gene, (R), Cannot appear in offspring of two non-roan parents, even if they have roan ancestors. The three primary base colors include red (chestnut “e” gene), black (“E” gene), and bay (Black “E” gene) + Agouti (“A” gene) which when paired with the roan gene result in the red or strawberry, blue, and bay roans, respectively.

Traits that are dominantly-inherited cannot skip generations, meaning that two non-roan parents cannot produce a roan offspring. In case where roan has appeared to skip generations, one of the parents is usually discovered to be slightly roaned. A roan can also be born from two seemingly non-roan parents if the roan coat is “masked” by extensive white marking or gray.

In some cases, the supposedly roan offspring is not true roan at all, but rabicano, sabino, or influenced by some other genetic factor.

The University of California, Davis School of Veterinary Medicine’s genetics services developed a DNA test that uses genetic markers to indirectly determine the number of Rn or rn alleles a horse has. The mutation responsible for true roan has not yet been identified exactly, but keen assigned to equine chromosome 3 (ECA3) in the KIT sequence. The roan zygosity test is reliable for American Quarter Horses and American Paint Horses.

King Richard II of England rode a famous steed named Roan Barbary in William Shakespear’s dramatic history bearing his name (Richard II, Act II, Scene 5). According to the play, this proudly prancing equine ate directly from the king’s own hand. Many literary scholars have asserted, over the years, that Shakespeare was partial to roan horses, as the Bard of Avon mentioned so many equines of such color in his writings. The classic line, for example, comes from Hotspur in Shakespeare’s Henry IV: Henry IV: “That roan shall be my throne” (Henry IV, ACT II, Scene III).

Historically the roan gene only occurs in certain breeds and not in other. There are no true roan thoroughbreds or Arabians, although those horses in these breeds having the gray gene are often called “roans” in common descriptive usage. The breeds of horse that possess the true roan gene include Percheron, Belgian, Welsh Pony, Peruvian Paso, Paso Fino, Quarter Horse and Paints.

The American Quarter Horse developed in the American colonies from the interbreeding of English Thoroughbreds (often infused with Arab breeding) and smaller breeds and draft horses such as Percherons and Belgians. During the opening of the American West in the mid-1800’s these Colonial horses were interbred with horses of Spanish ancestry coming north to the Great Plains from Mexico, which were the first horses re-introduced to the New World by Cortez and the Conquistadors.